THE STORY OF THE TEARDROP TRAILER - PT. 19

IT'S FINALLY DONE!!!  Well, not quite, but they were done enough to start using the trailer.  They registered it the following day after these pics were taken and started pulling it around directly after.  It went with Chris home the very next night and all the final touches were done at his house. 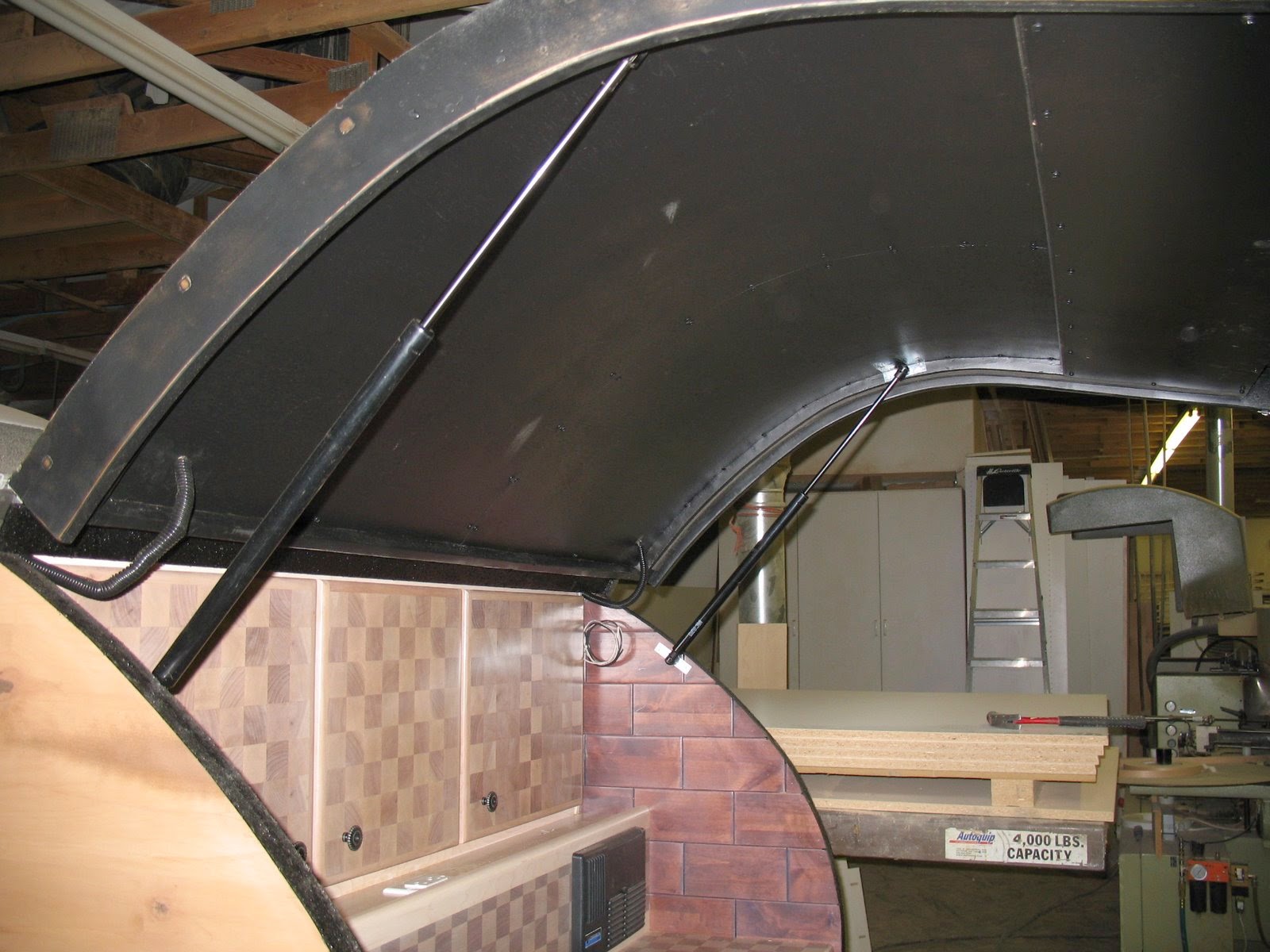 Installation of the gas lifts was the next step in the project.  Chris did it over the weekend and it fit perfectly on the first try.  The lifts were purchased from a company that had gone out of business and was in the process of liquidating inventory.  They worked great.  He lifted the lid about 12" and the lid slowly opens the rest of the way.  It is easy to put down without any effort at all.  They work better than then the boys ever imagined they would. 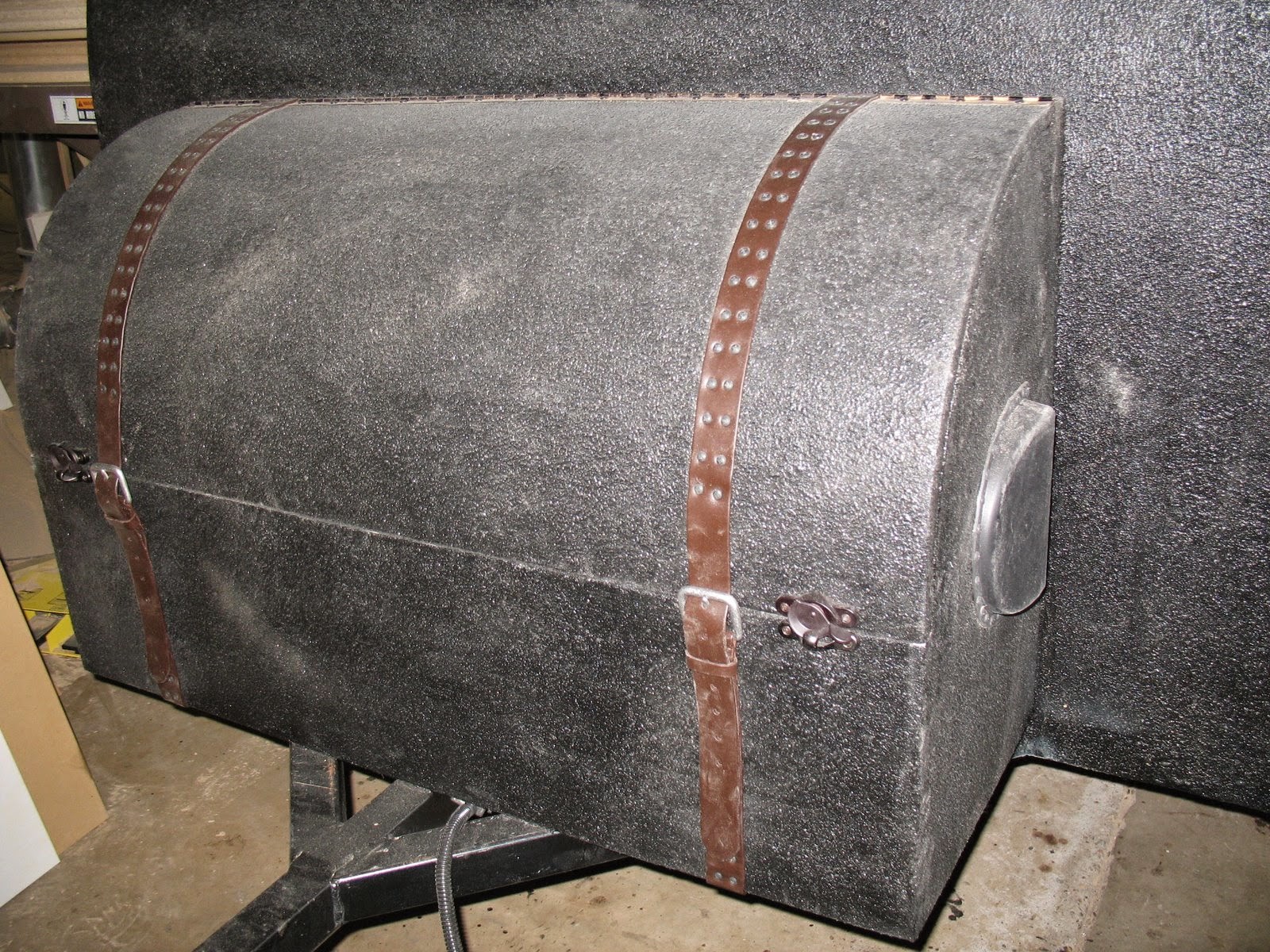 As you can tell, they had to replace the leather straps on the trunk.  The black genuine leather belt straps broke after the first weekend.  They discovered small print on the belt saying the genuine leather had some man made fibers.  What is really had was a microscopic leather veneer with cardboard interior.  They avoided buying imitation straps the second time.  They also installed some sash locks to pull the lid down tight and keep it secure. 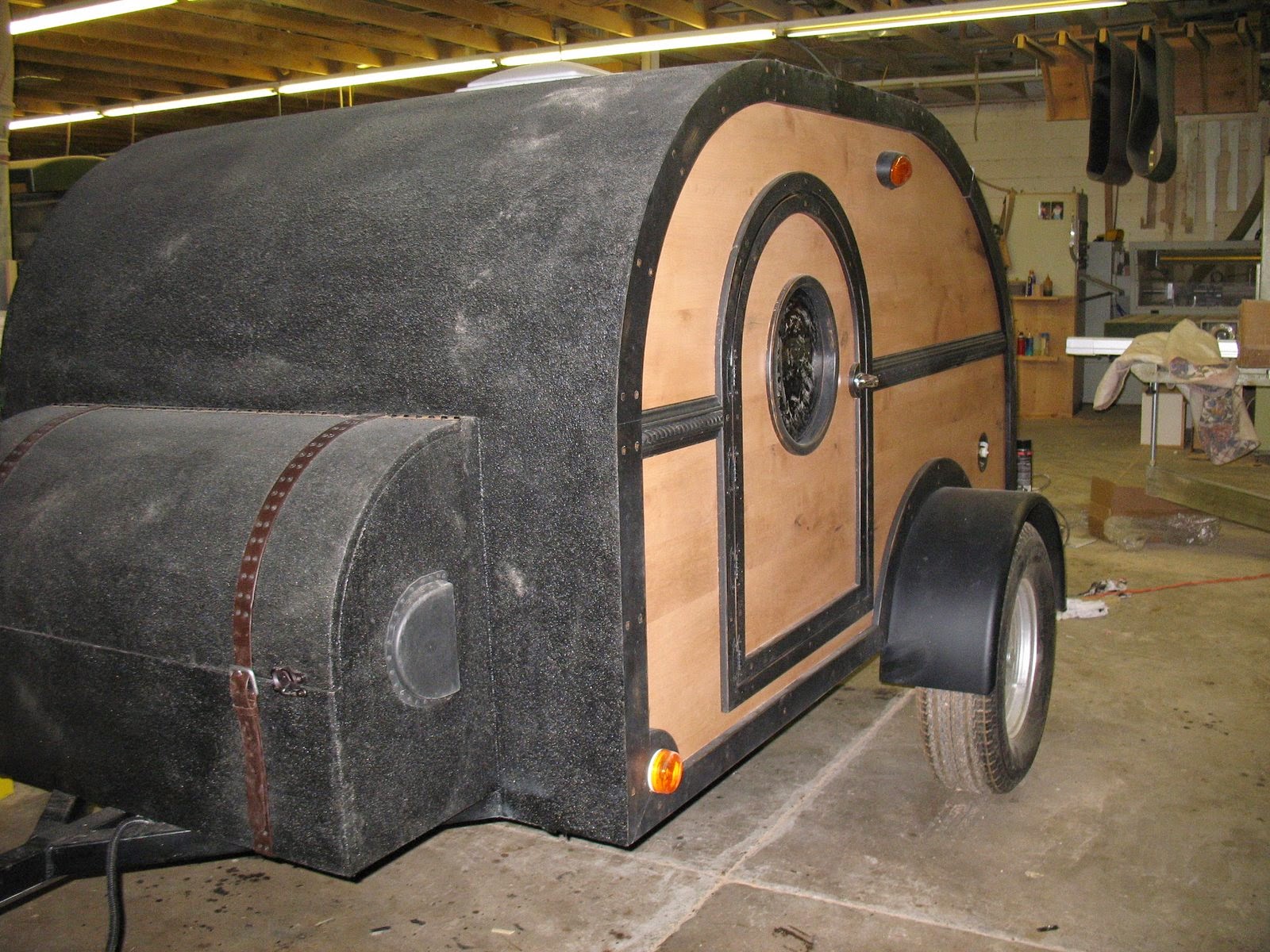 This is a side view showing how the trailer looks with the trunk complete and closed.  It looks super dusty.  But that's par for the course when it's sitting in the shop. 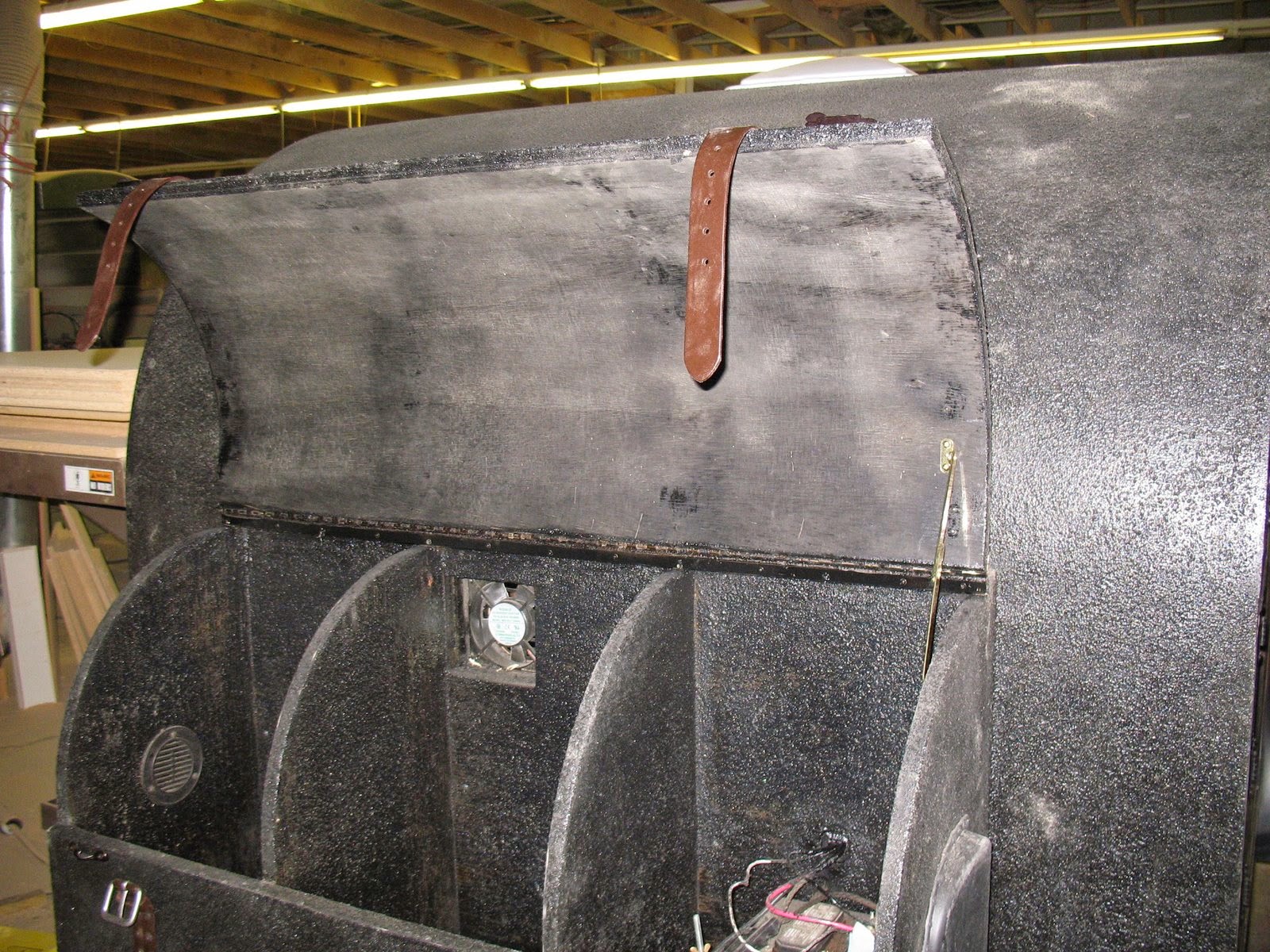 The boys installed a lid stay so they could access the box without holding the lid up by hand.  They also put in the battery tie downs so the battery doesn't bounce all over the place.  This pic seems a little strange in it's color because the flash is bouncing. 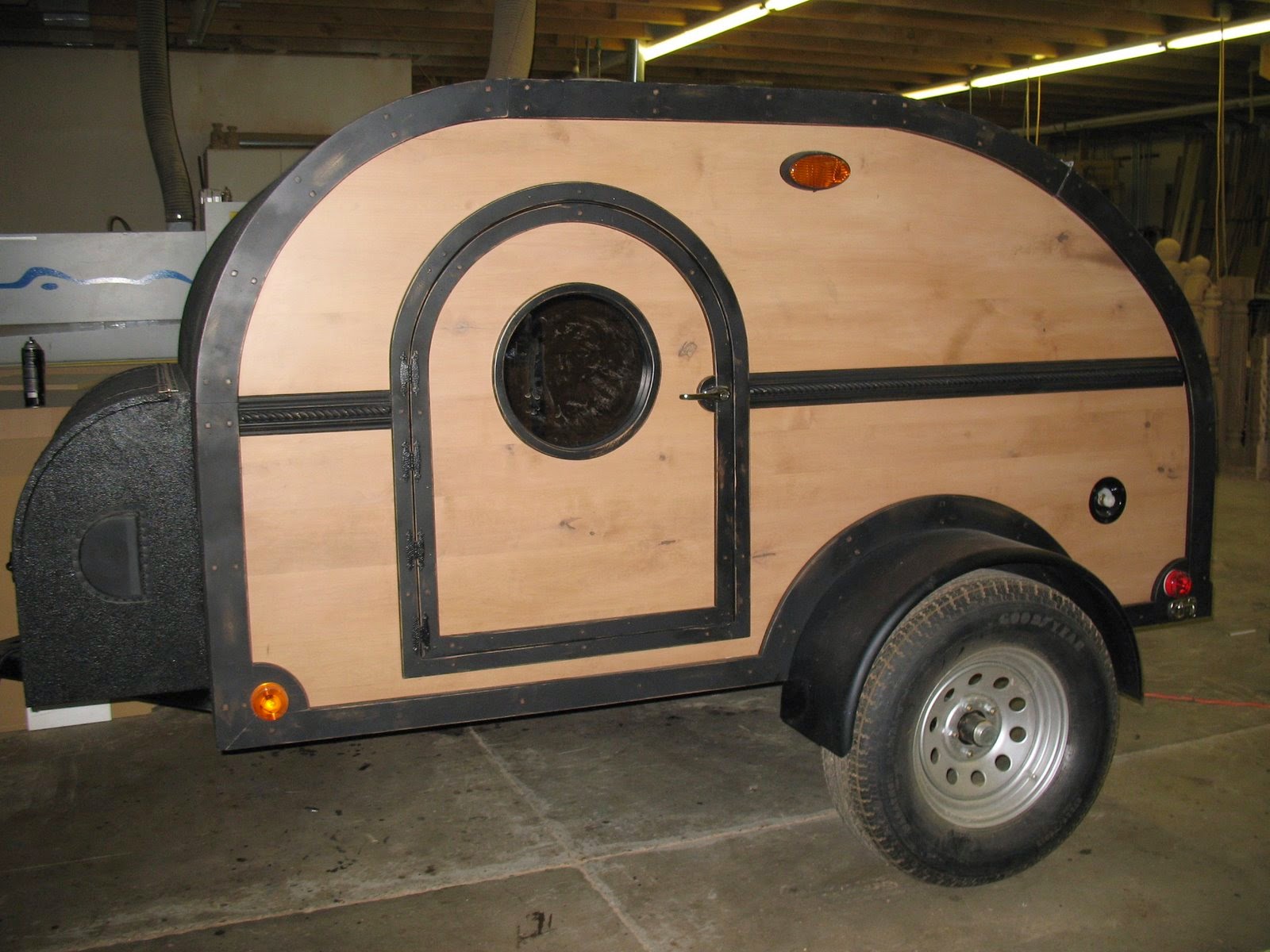 This is the side view of the completed trailer.  Magnifico!  It looks amazing! 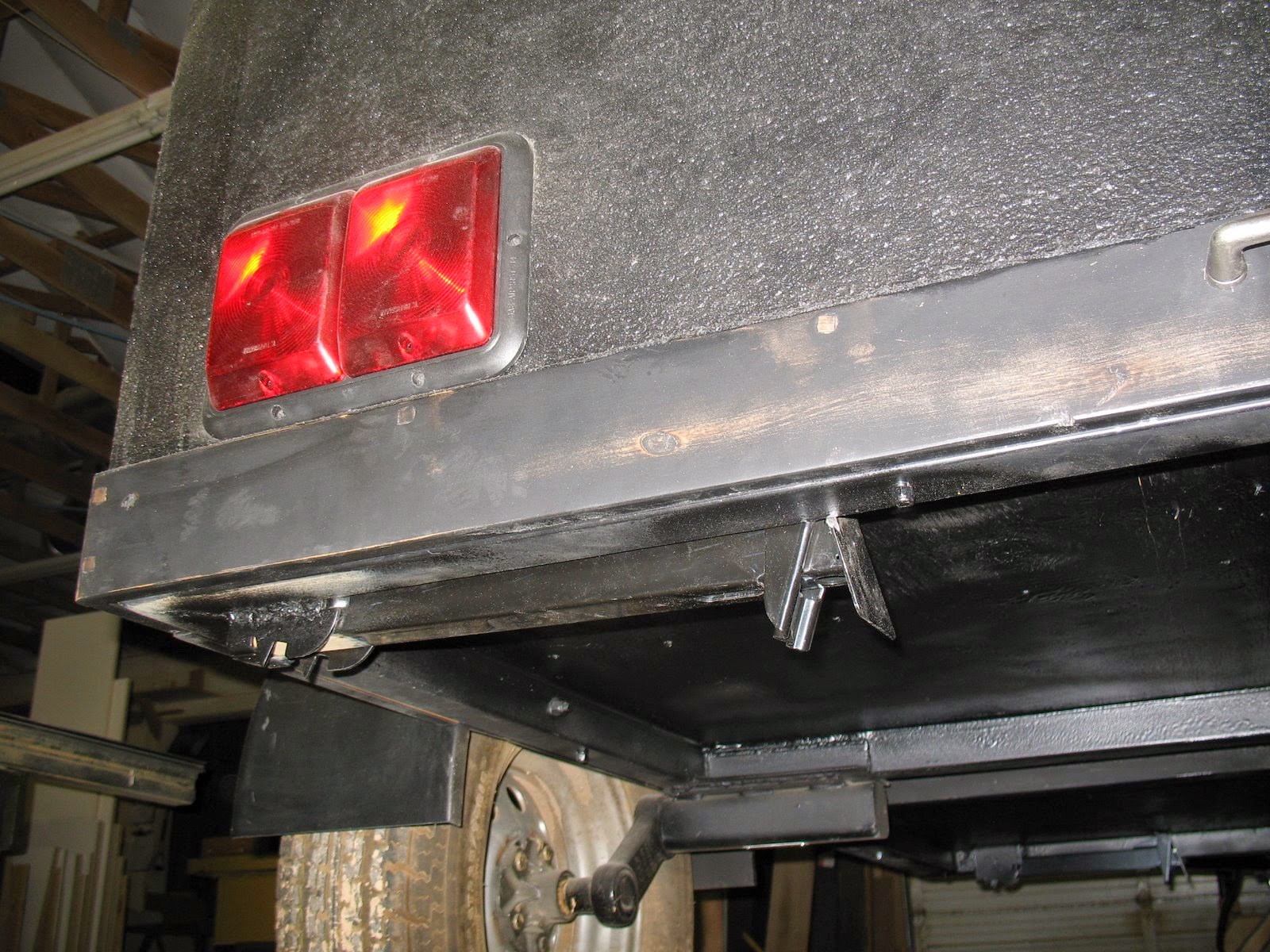 This pic shows the fold down stabilizers.  There are four, one for each corner.  They will make it nice when the wind blows so you're not rocking all over the place. 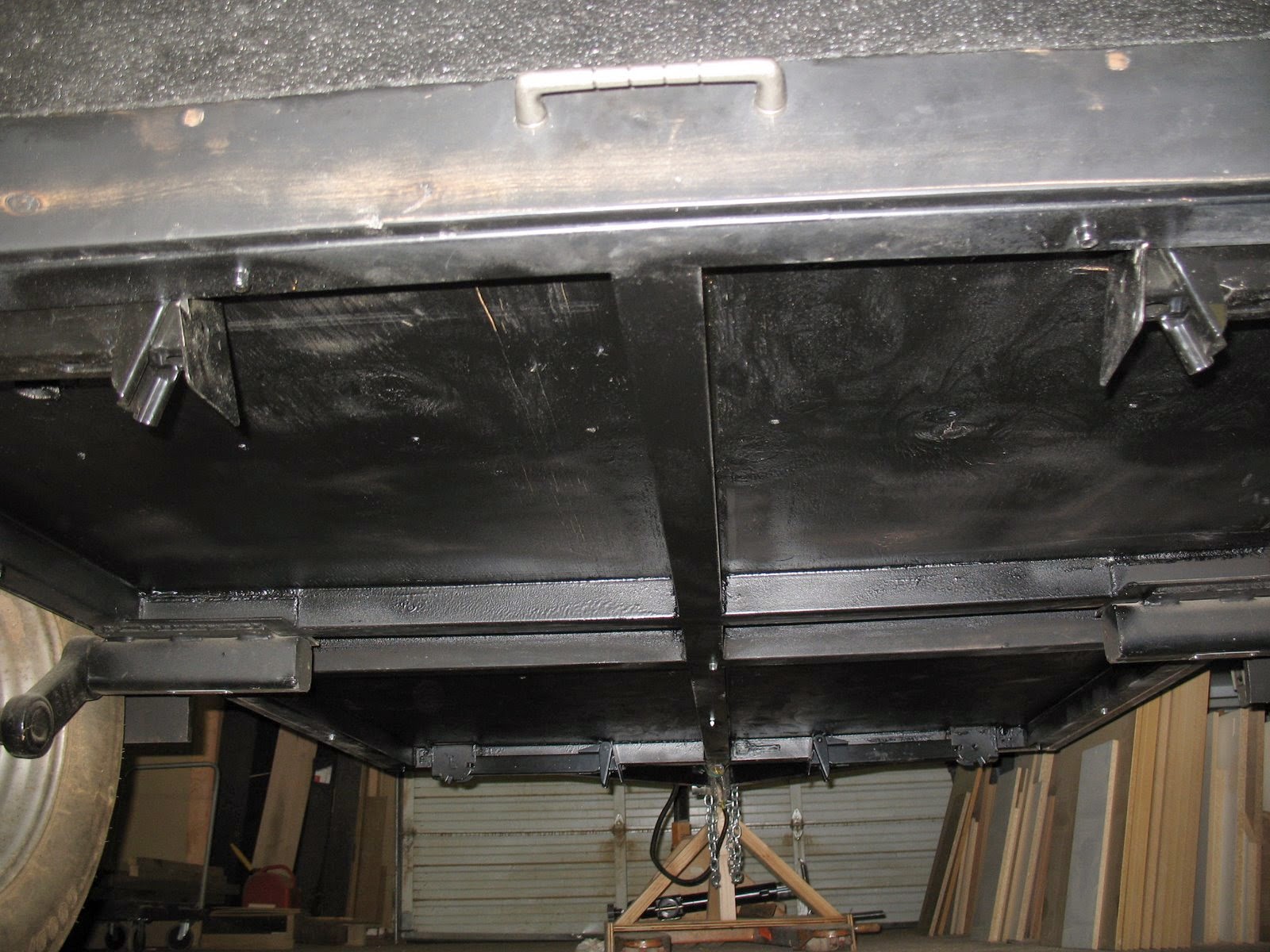 This picture shows the undercarriage after it was all sealed with rubberized coating.  They used this coating so it would be easy to re-coat when necessary.

There are still a few minor things left to complete at this stage and they are:
01. Complete the plumbing hook up to the pump.
02. Add a light in the trunk lid.
03. Insulate the ice chest in the front trunk.
04. Complete the oven insulation and slide out.
05. Clean the over-spray off the roof vent.
06. Putty, seal and weatherstrip the door frames.

And that will wrap it up.  Chris commented at this point that all they needed was one free morning and everything would be finished.

For those of you who have read the story, maybe you've been lucky and seen the trailer in Utah or surrounding states.  The boys have taken it all over the place.  They've stopped and given a lot of people a closer view.  They wanted to post a blog about trips they've taken with the trailer.

My next entry will show pics from one of these trips.  You'll be able to see the trailer in action!  Goodwin Mill And Cabinet is where you'll find other amazing craftsman pieces similar to the teardrop trailer.  You can see more galleries of our work and check out more information about the guys who built the teardrop trailer by visiting:

Posted by Spencer Goodwin at 1:57 PM

Spencer Goodwin
Fourth generation partner in the family business. Proud to be a part of the Goodwin tradition of quality and excellence.